So last night I decided to hangout with some vikings, and catch some totally sick viking metal. That's right my faithful readers, I rocked to Amon Amarth. Johan has got the most amazing voice, I can only imagine he tells the best campfire/ghosts stories. Awesome show, and the openers Eye of the Enemy and Orpheus were good too. 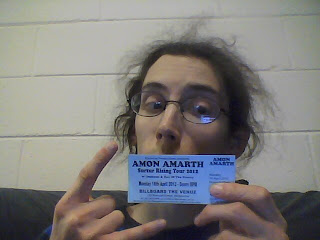 Then, tonight, I decided to go grab some coffee with a buddy. Well, as we were heading towards DeGraves Street in the CBD, we ended up walking through the set of a movie being filmed (I, Frankenstein). I had seen tons of filming trucks around for a few months, anyways, they happened to be filming a street scene down Flinder's Lane. Fog machine, car, etc etc. Anyways, I saw them film a dude run on top of a car. Pretty neat.

So I went to the Astor Theater in St. Kilda, Melbourne last night. This is a way old and cool theater, kinda like the Naro in Norfolk, VA but about twice the size. The restrooms are called the "cloak room" and there is a "resident" theater cat. This place is just marvelous. They tend to show older classics (e.g. Ghostbusters, Back to the Future, Indiana Jones...), and even B-movies. Last night I saw Jim Henson's 1986 film "Labrynith". Great film staring David Bowie (and his package a'la way-tight-pants). And yeah, he is an awesome actor, one word... "epic." Great flick, great theater! -Matt
Posted by Matt at 9:07 AM 2 comments:

So last night I decided to head over (down-and-over) to see my buddy's band play in Richmond (in Melbourne, AU) at the 1890's built Great Britan Hotel. I am sure you can imagine that such a building was probably a pretty early establishment during the birth of Melbourne. Anyways, I get there to this way cool bar, with a pinball machine, two floors, and a beer/smoker garden. Anyways, I don't drink, but I explored a bit and ended up on the basement floor in what seemed to be like a dungeon. Candle-lighted, and very low house lights. Anyways, that's where the band played. So, as usual, I had to take a leak. Well, I was directed through a rather oddly (horse-stall shaped) door, and to my chagrin, as common in pubs/hotels around Melbourne the men's urinal is just a large wall of metal you pee on, and water periodically washes down it. Well, these pee-wall's (is there a proper name?) have a little raised area just before the wall, so most people step up on it and let-loose from there. Well, when I first got to Melbourne (~1.5 years ago) I thought you were /not/ supposed to step on them, so I would effectively pee-behind-the-line. Well, as I learned some time soon after I arrived, you are to stand on the raised-ledge, and hit the wall from there. Well, the ledge was a bit taller than I imagined and I tripped. And that's when that slow-mo life-threatening state of mind kicks in. I was falling forward... forward into the urinal! NooOooOoOooOoo. Luckily my neurons fired a bit faster, and told my hands... "hey hands, ya know you are about to touch a pee-wall... that's pretty gross... yea?" So I retracted my hands, just before touching the wall, and some how, through shear will and fright, I regained balanced and was able to avoid being eaten by the urine-thirsty metallic monster. -Matt
Posted by Matt at 9:20 AM No comments: