In 2012 Colonel Sanders will surface and laugh at the fact that his death was all a mere joke.  Upon this event, he will soon be granted an honorary doctorate from a small southern university, where abouts he will be known as Dr. Sanders and sit as the  chair of ornithology focusing all of his efforts upon the study of flightless birds.

My second prediction is that an inverted microwave will finally be invented, allowing humanity to enjoy cold bananas in just a split second.  I must credit my father for mentioning the concept of an inverse microwave to me years ago.

Hey friends, family, enemies, and stalkers.  The sexxyness that is bound to the name Matt hopes that you all have a good holiday season.  Well, that is actually a disjoint set.  Let me restate.  I hope all in the sets I previously mention have a great holiday season, except for my enemies.

So, I went into the city, what else is a single guy, to do on Chirstmas Eve?  Well, to my finding.  The city was packed, and this was around 10PM.  It was great, so many people out, I was in a rather peaceful mindset, and took a few pictures.  The State Library of Victoria, and some massive church down on Flinder's (across from Federation Square) both have had projections of holiday animations for the past few night (possibly longer).  Anyways, I was just surprised at all the people out.  It didn't even seem like a holiday, just another, rather decent/temperate night.  I have some pics from the past two nights up on my flickr http://www.flickr.com/matt-davis

What I find funny, is that the explicit use of the term "Merry Christmas" all over the city, such as Flinder's Street Station and light pole flags.  No political correctness bullcrap, just straight up Merry Christmas, no Happy Holidays.  I find that nice.  But ultimately, and this is key: May this be a holiday season that escapes the religion that bounds it.

May this be a holiday season that escapes the religion that bounds it.

Much love and peace

Occasionally my layout has captivated me.  Here is my layout showing some compiler-plugin hackery. 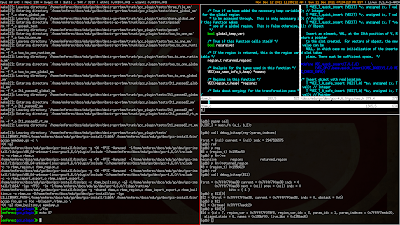 So I was trying to explain why, when someone is hacking on compilers, such as a compiler addition (as my PhD research is doing), the dev must adhere to such stringent standards of "quality control."  Compilers must do what the user/coder instructs via their source to which they feed the hungry-hungry-compiler.  Anyways, in explaining, possibly justifying some remorse for my digital masochism in trying to build a compiler-extension and then break it with tests... this little gem surfaced:
"So it's like building a house, and then trying to blow it up to make sure it still stands.  Blowing it up is often easy, but building a house that still stands is paramount."

Went into the city last week to get out and take some pics of graffiti.  None-the-less Melbourne didn't let me down.  The freshest of the pics are up on my Flickr page (http://www.flickr.com/matt-davis) for December 3rd 2011.